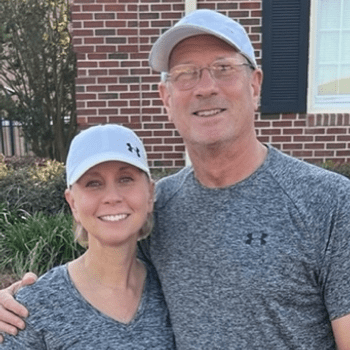 Do you have questions for Doug or Rebecca Carroll?

Log in to ask Doug or Rebecca Carroll questions publicly or anonymously.

Doug or Rebecca Carroll
Quo Vadis?
Posted recently
How great is this! My son surprised me this weekend by meeting me in Savannah for the 5K. This is the first time we had a chance to run together since October Half at Jekyll Island last October. I have my runner family and my family of runners! 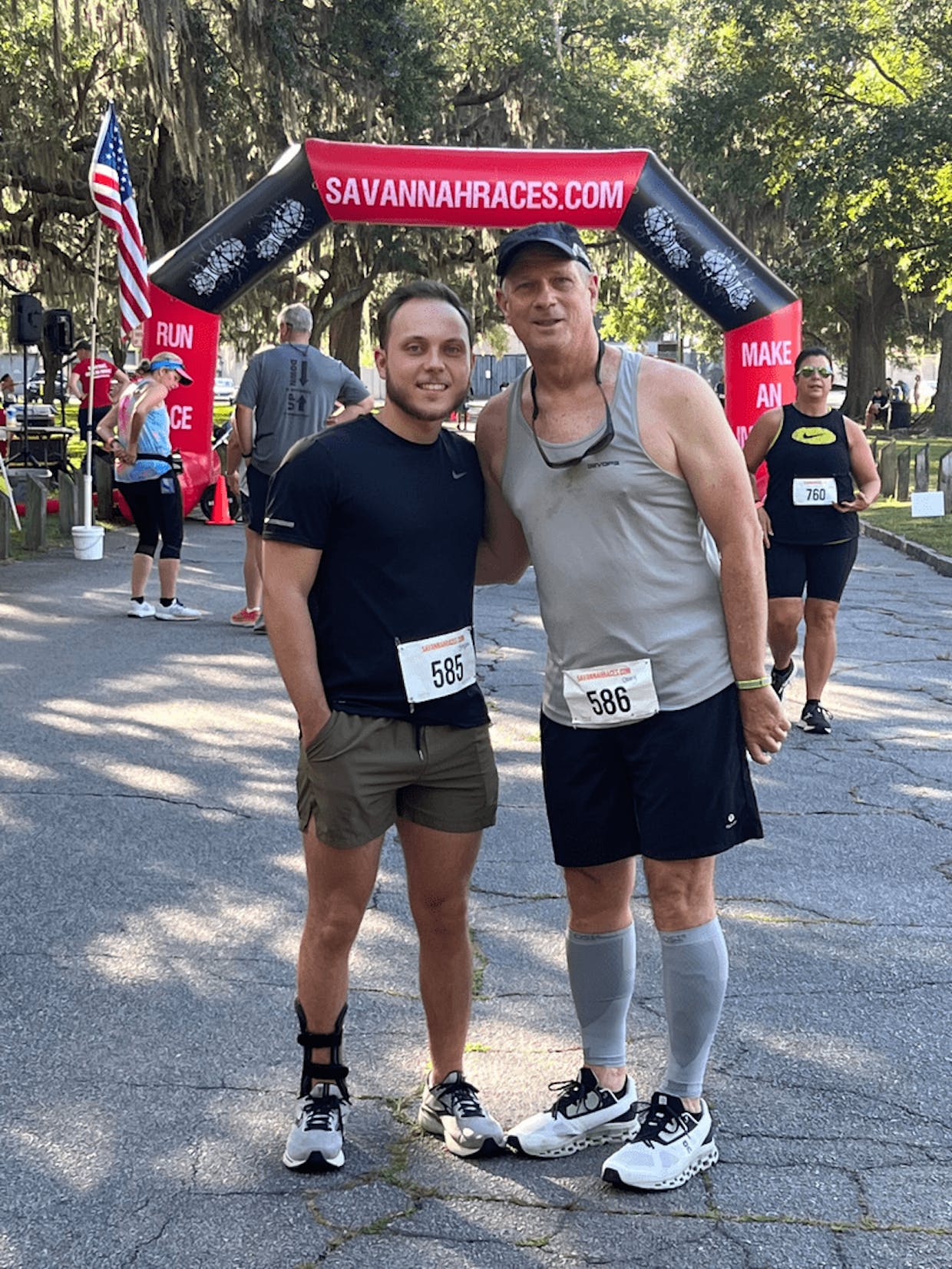 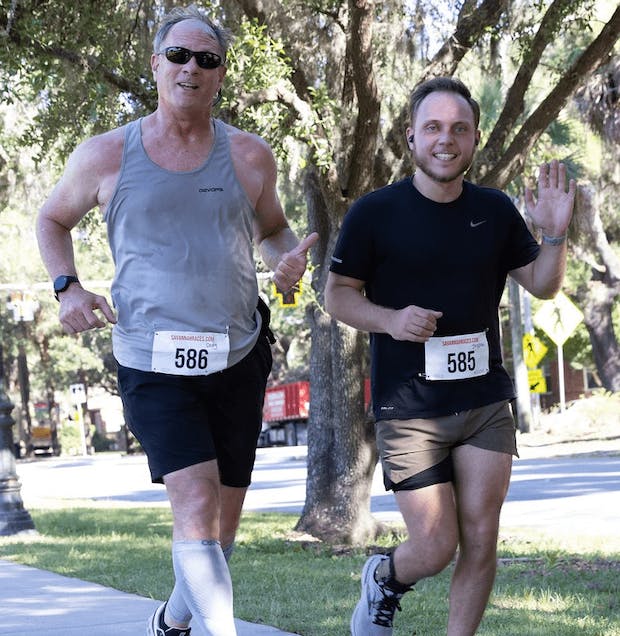 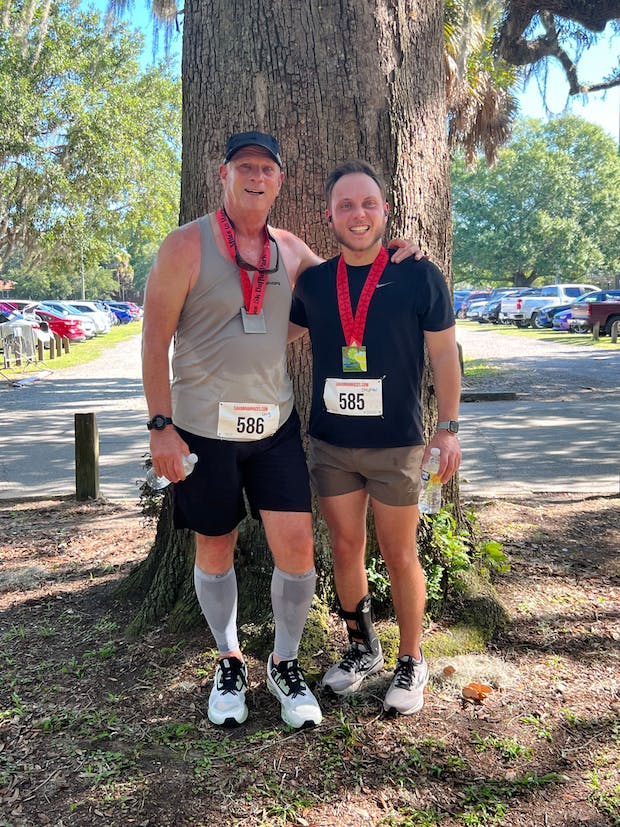 Doug or Rebecca Carroll
Quo Vadis?
Posted 21 days ago
Runners can sometimes be self-absorbed and a little too concerned with personal best or records. It's good to let go of the competitive edge and remember what it was like when you completed your first 5K or other runs. For me, that was more than 40 years ago! I don't recall the run but I'm sure it included big hair, long white cotton calf socks, clunky canvas shoes, short shorts, and probably a heavy cotton t-shirt. Running gear has come a long way since back in the day. Just ask those guys from a Sears ad.

What I do recall about my early 5K days was not the gear as much as the encouragement I got from other runners. I have had the privilege over the years of slowing down and returning the kindness other runners showed me when I was new to the sport.

Sometimes that's just encouraging them when they are struggling. Maybe you paced a runner to the finish line. Possibly it was when you let them pass you in the chute or moved one way so that the finishing picture was only of them. Other times it was something simple like making sure their bib is on the front of their shirt. During my one marathon, it was sharing my Pay Day during the race with a runner who had run out of energy!

Last Wednesday for Global Running Day, I had the privilege of being the pacer for my wife and her cousin; her cousin's first 5K! Our time to finish the race was not as important as the time we spent together finishing the race, encouraging one another, and sharing the experience. Congratulations to Patricia! I hope you have many more races.

So, at your next race, put aside trying to always set a new personal record or personal best. Instead, be a personal best by finding someone new to the sport and being an ambassador instead of a competitor. 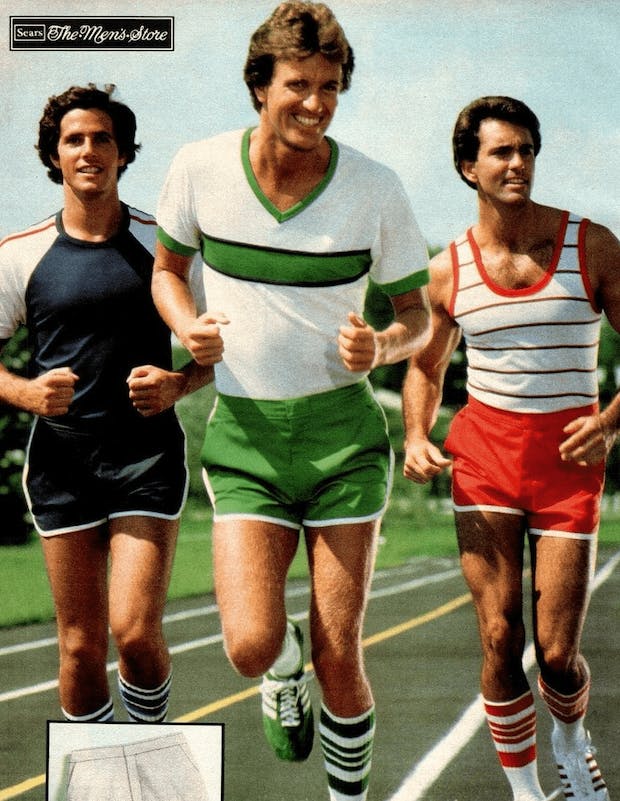 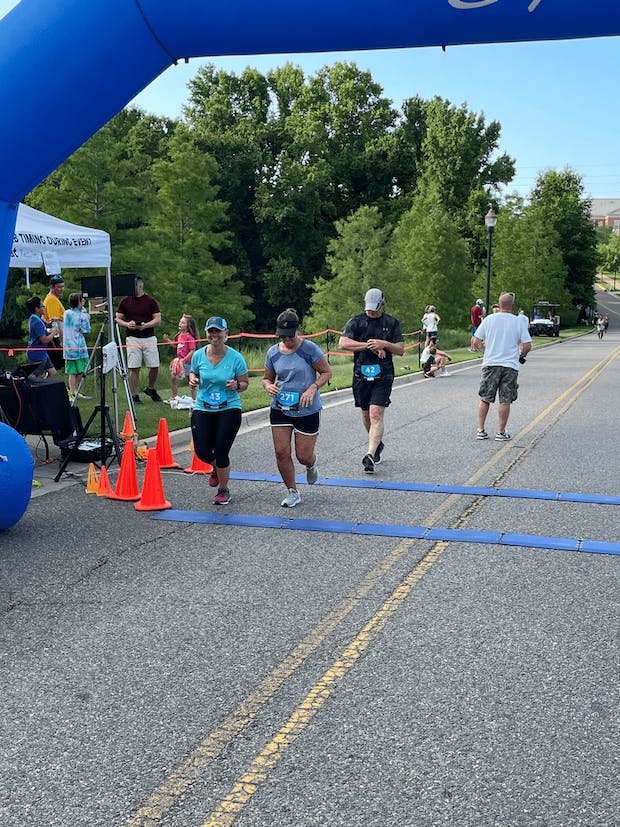 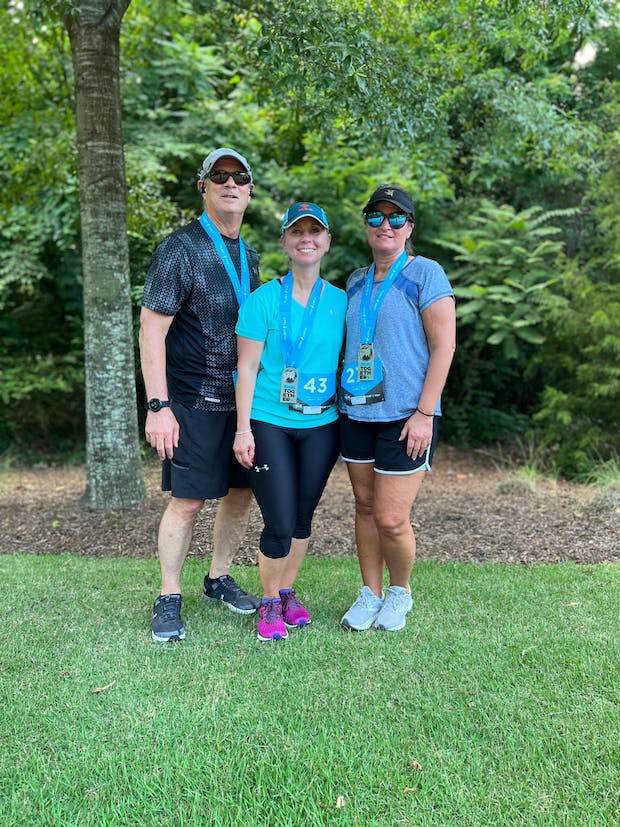 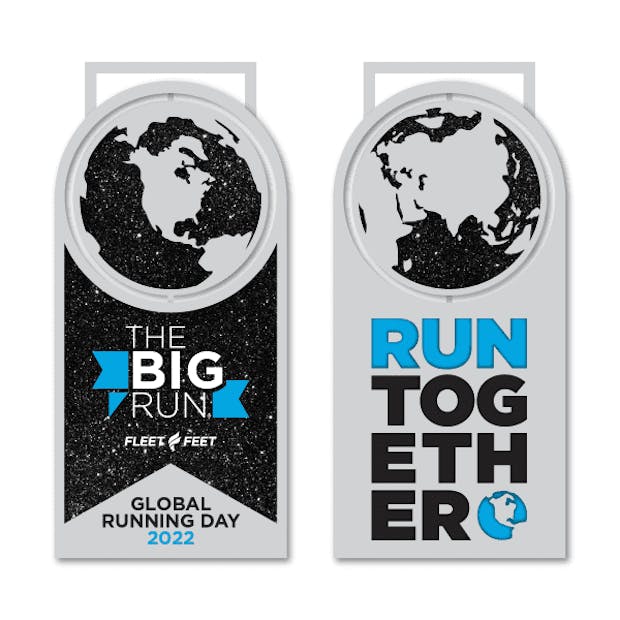 Liked by Daniel Pavlin and 2 others

Doug or Rebecca Carroll
Quo Vadis?
Posted 2 months ago
I just signed up for the Pooler Juneteenth Celebration Run in June. As some of you know, I write educational materials for homeschool, private, public, and interested students. For those who may not be familiar with Juneteenth or want a short primer on the new federal holiday, I have attached the content from a history lesson. It's a short history of Juneteenth. Any comments you have please feel free to send them to my Doug.Carroll.EdD@gmail.com and hope you enjoy the history lesson!
History o ...
1 comment

Doug or Rebecca Carroll
Quo Vadis?
Posted 2 months ago
Rebecca and I ran in the Another Bloomin Run 5K Metter, Ga. last Friday. It was the first time she ran a race in over 2 years. I can't think of anyone I'd rather run with. Can't wait for our next race together. 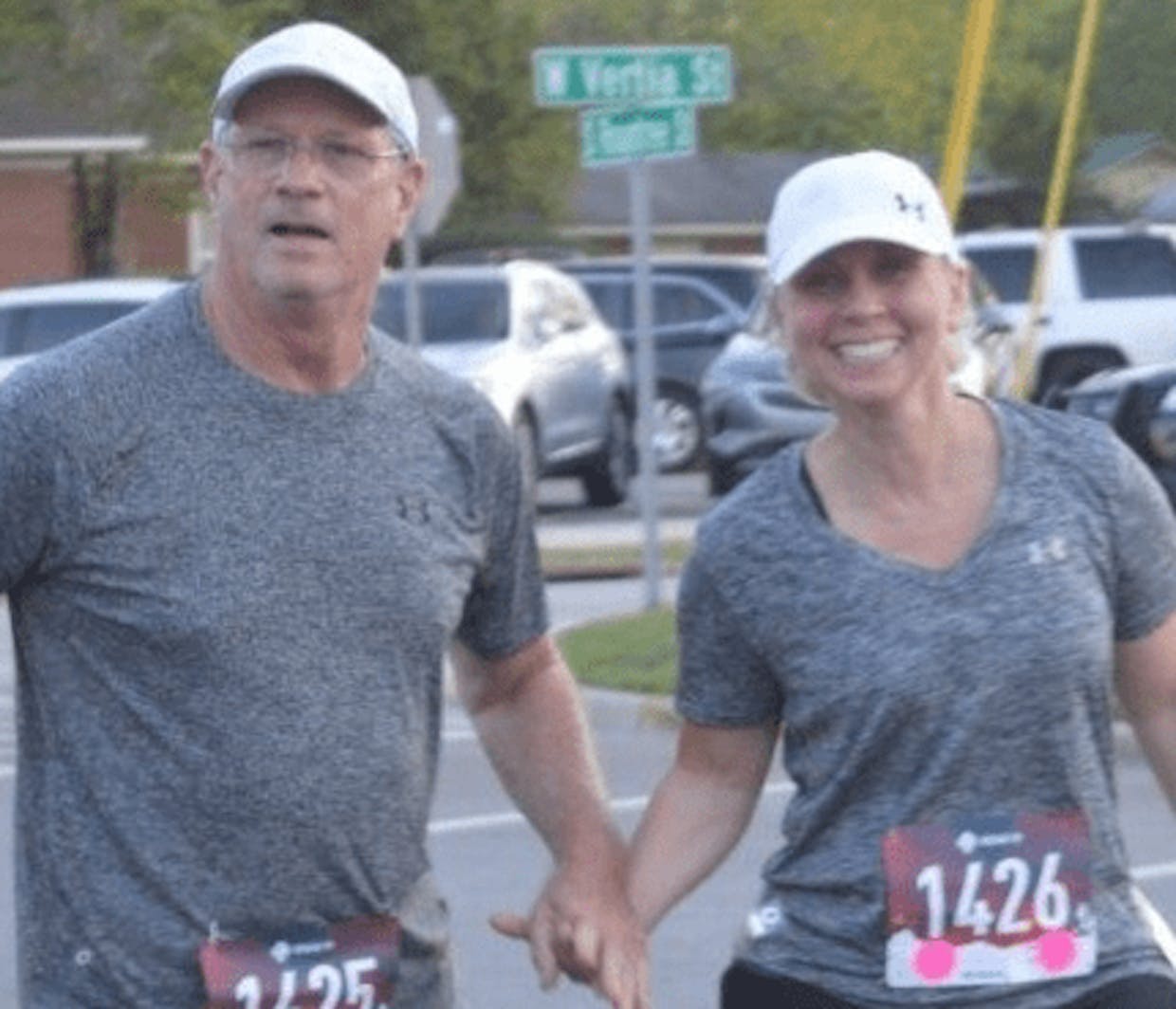 Liked by Heather Hartnett and 2 others

Doug or Rebecca Carroll
Quo Vadis?
Posted 4 months ago
Rick Monroe, my lovely wife Rebecca, and I got an early picture together. Rick was my Young Life leader when I was in high school (1975). Rebecca and I met through Young Life. Can you think of anything better than two of the best things to ever happen in your life be in the same run! Note the cool matching shirts. My wife says you can be slow, but you have to look good. 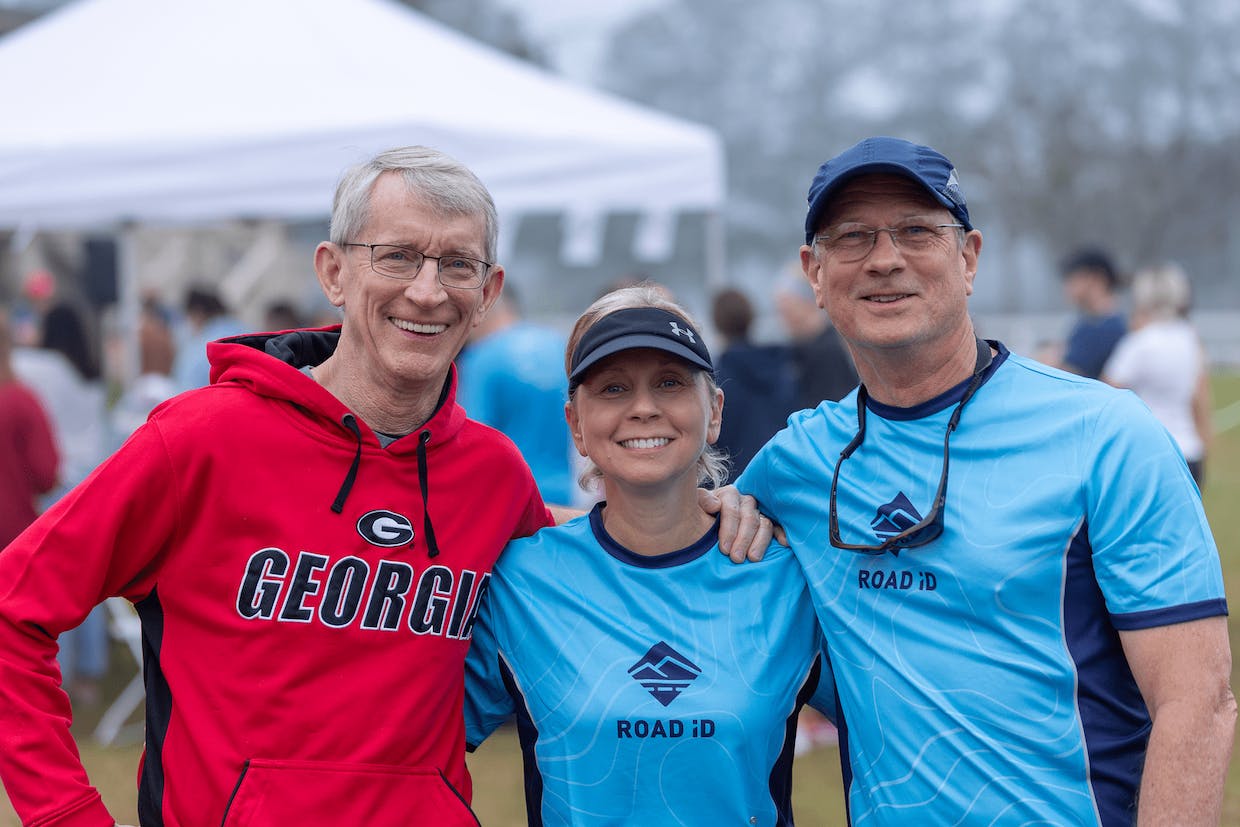 Doug or Rebecca Carroll
Quo Vadis?
Posted 4 months ago
I recently found this picture. You may be asking, what does it have to do with running? This is a picture from the mid-seventies of our Young Life Group. Our Young Life group packed into one person's living room every Monday night with nearly 45 teenagers every week! The person in the middle is Dick Mahaffey, our Windsor Forest Club leader. This picture is from when we all attended his wedding nearly 50 years ago!

Young Life has been an integral and important part of the Savannah community for more than a half-century. It has positively and profoundly influenced tens of thousands of teenagers who are all now adults and is continuing to make a positive difference in Savannah as well as the world. If you haven't signed up for the Chick Fila Race benefiting Young Life, please do so. I've had a minor hamstring injury but look forward to limping along the trail for this race on March 5. 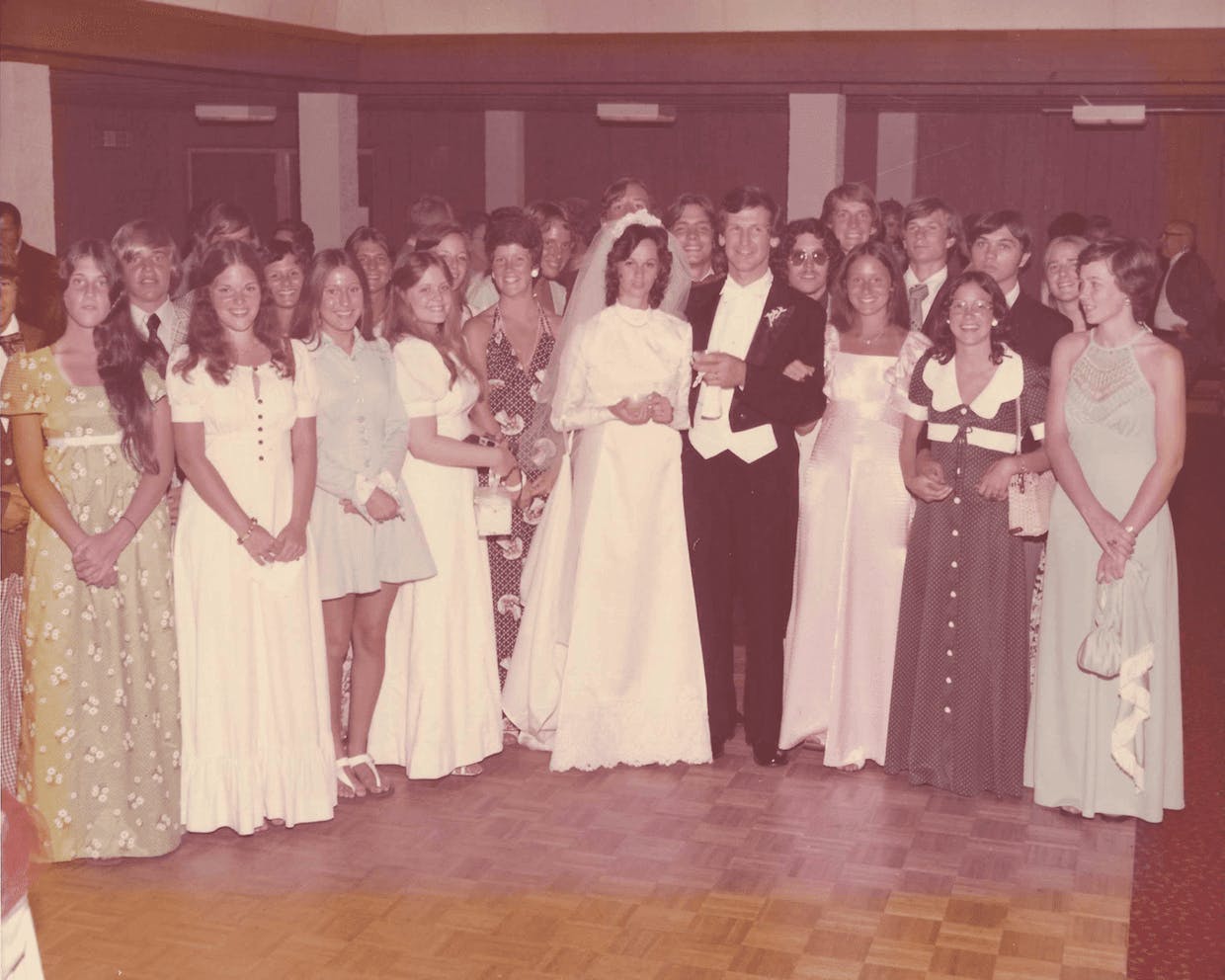 Liked by Daniel Pavlin and 1 other

Doug or Rebecca Carroll
Quo Vadis?
Posted 5 months ago
The MLK Race was great! Windy, cold, and just the kind of weather you expect for January. Just a reminder, while we run there are many, many, volunteers keeping us safe, hydrated, and pointing us in the right direction. I always try to thank the volunteers at the check-in, water, and other stations throughout the course. Corey Brooks always makes me look good in photos which is no small order. And, let's not forget the police officers that direct traffic!

If you have room for one more New Year's Running Resolution, think about adding this one for every time you see a volunteer or police officer at a run; "Thank you for volunteering and all that you do!" 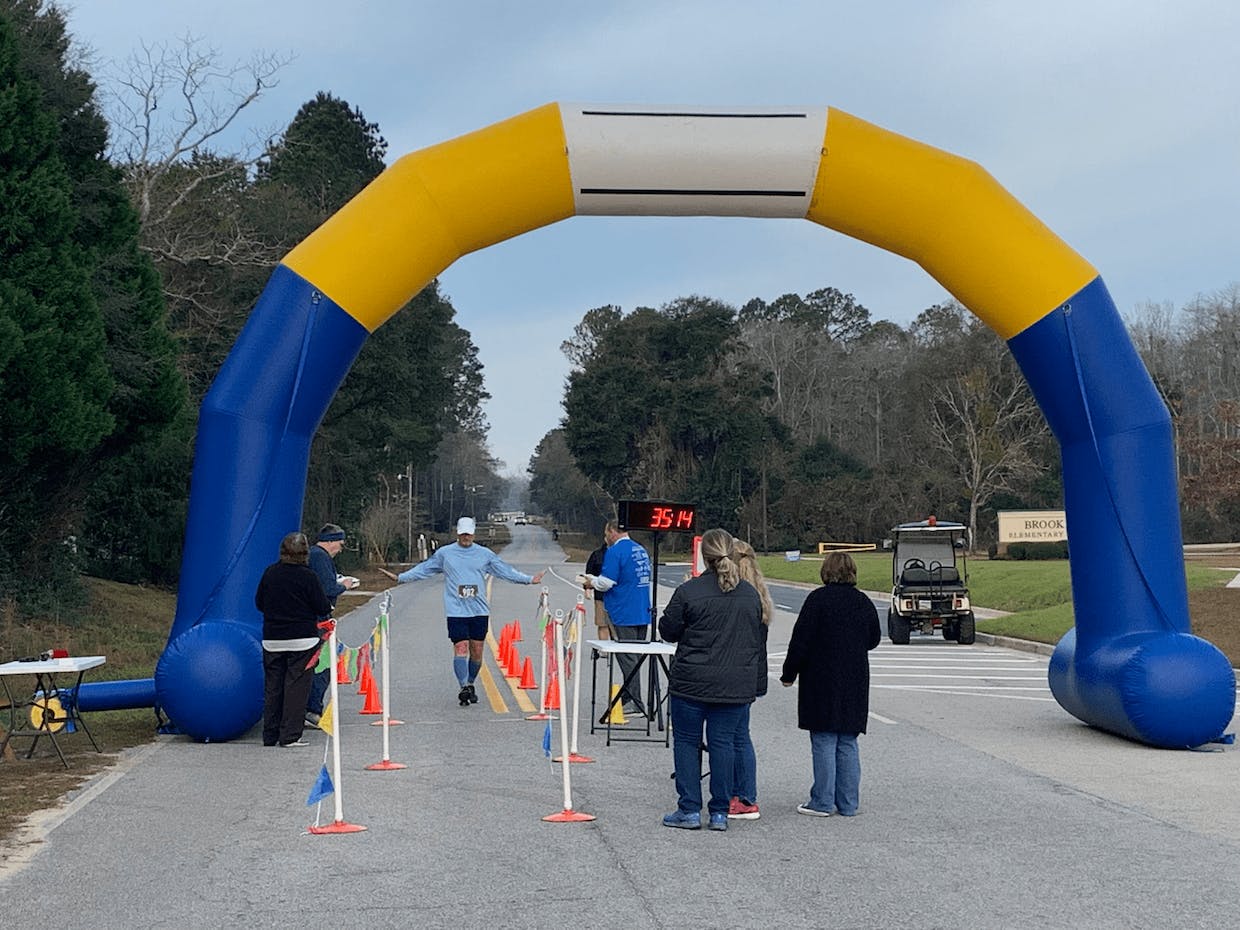 Doug or Rebecca Carroll
Quo Vadis?
Posted 6 months ago
I know folks are thinking about January racing. I live in a small town and try to make races in other locations outside of Savannah. Small communities like where I live in Brooklet, support hundreds of charities and other community activities. They often go overlooked when runners are looking for a race. Here is one that I want everyone to think about.

It's January 15 in Brooklet Georgia (40 minutes from Savannah). 2022 New Year's Resolution Run/Walk 5K - Registration is on the ERS Site. The race proceeds go to support a mission in Uganda to educate, feed, provide medicine, and other needs to 73 children at Jeholand Junior Academy in Kabowa.

At last count, Cierra had 75 runners registered. I want to challenge you to come out to support a small-town charity that reaches globally. We need 200 runners! The course follows the Brooklet Peanut Run 5k if any of you have run that in the past. Hope to see you there! Here is the link if you have other questions. delightinthelordministries@gmail.com

Here is a photo of a pond you will run by! 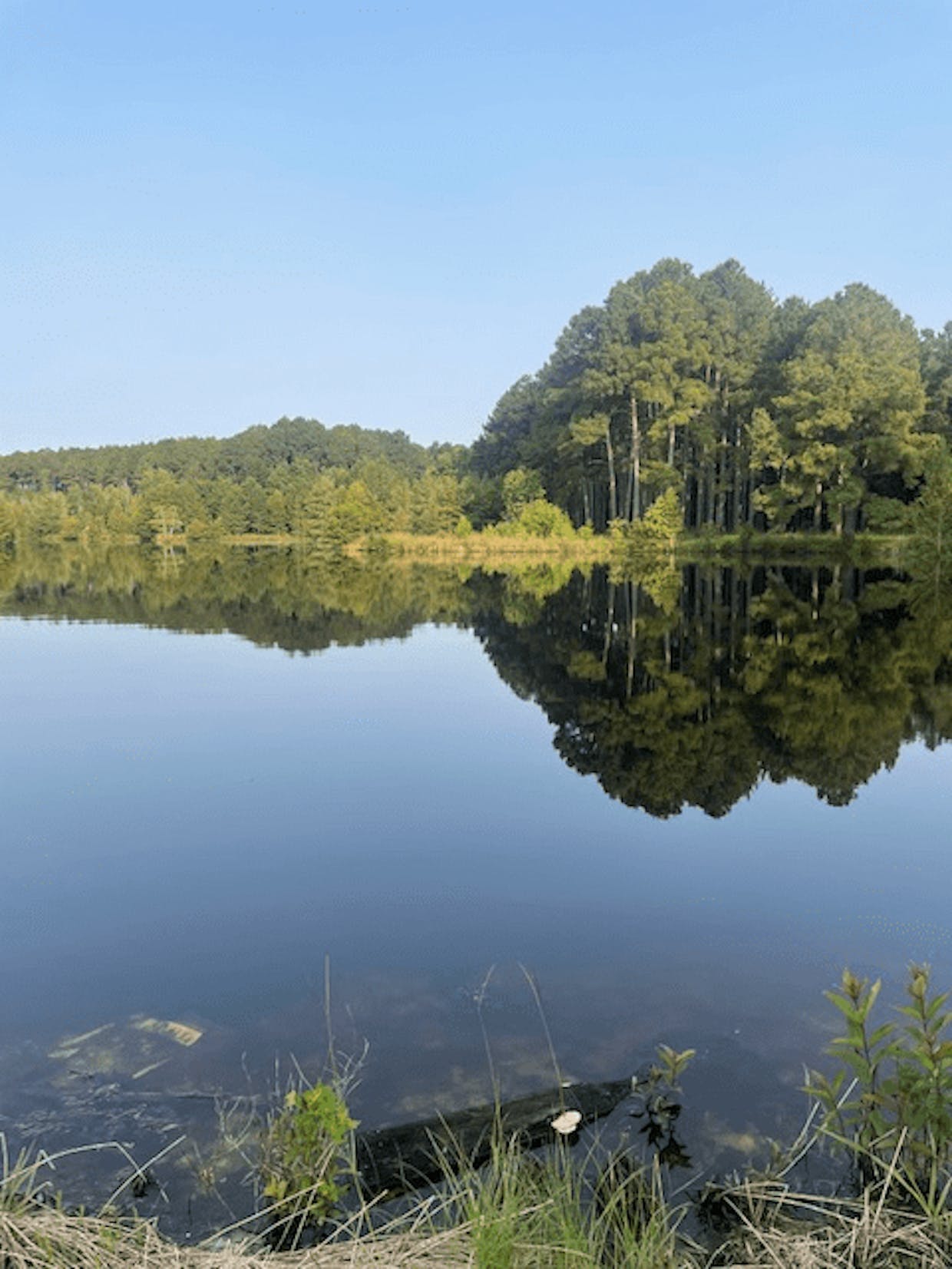 Doug or Rebecca Carroll
Quo Vadis?
Posted 8 months ago
I love trail runs, especially at Skidaway Island State Park! If you haven't been out there lately, you should visit. This morning's run was the Trail of Hope benefiting Covenant Care Adoptions. Here are some pictures from the race. I wish they had more people running. They need to promote the race through ERS! It truly is a great event. 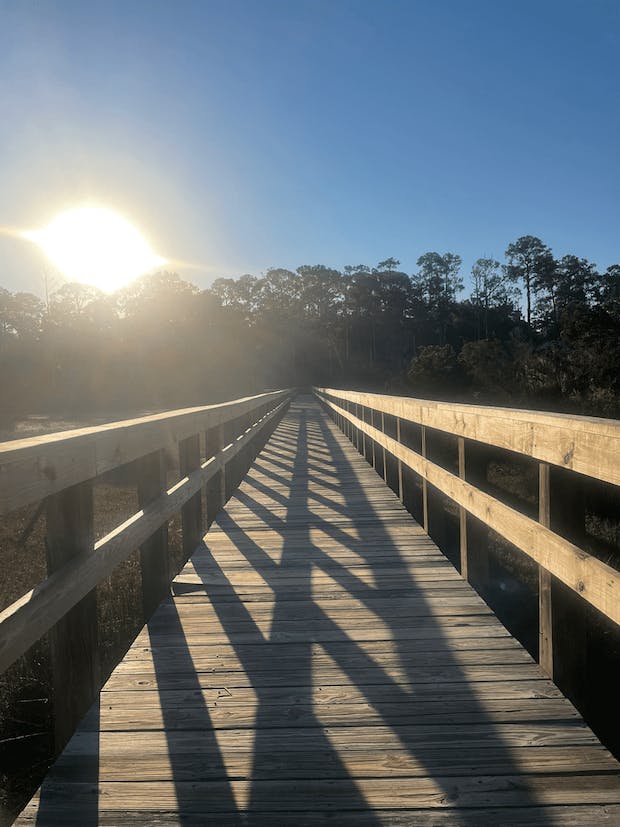 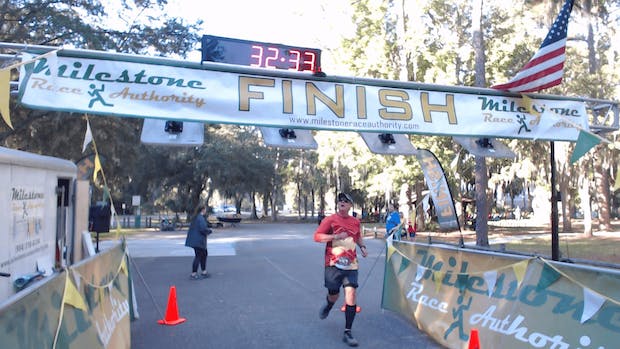 Doug or Rebecca Carroll
Quo Vadis?
Posted 8 months ago
There is nothing more important than family. This is a photo at the Under the Oaks Half-Marathon on October 9, Jekyll Island. This is the first time my son and I have run in a race together in several years. Savor the moments. The years go by fast (Unlike how long it took us to complete the half!). 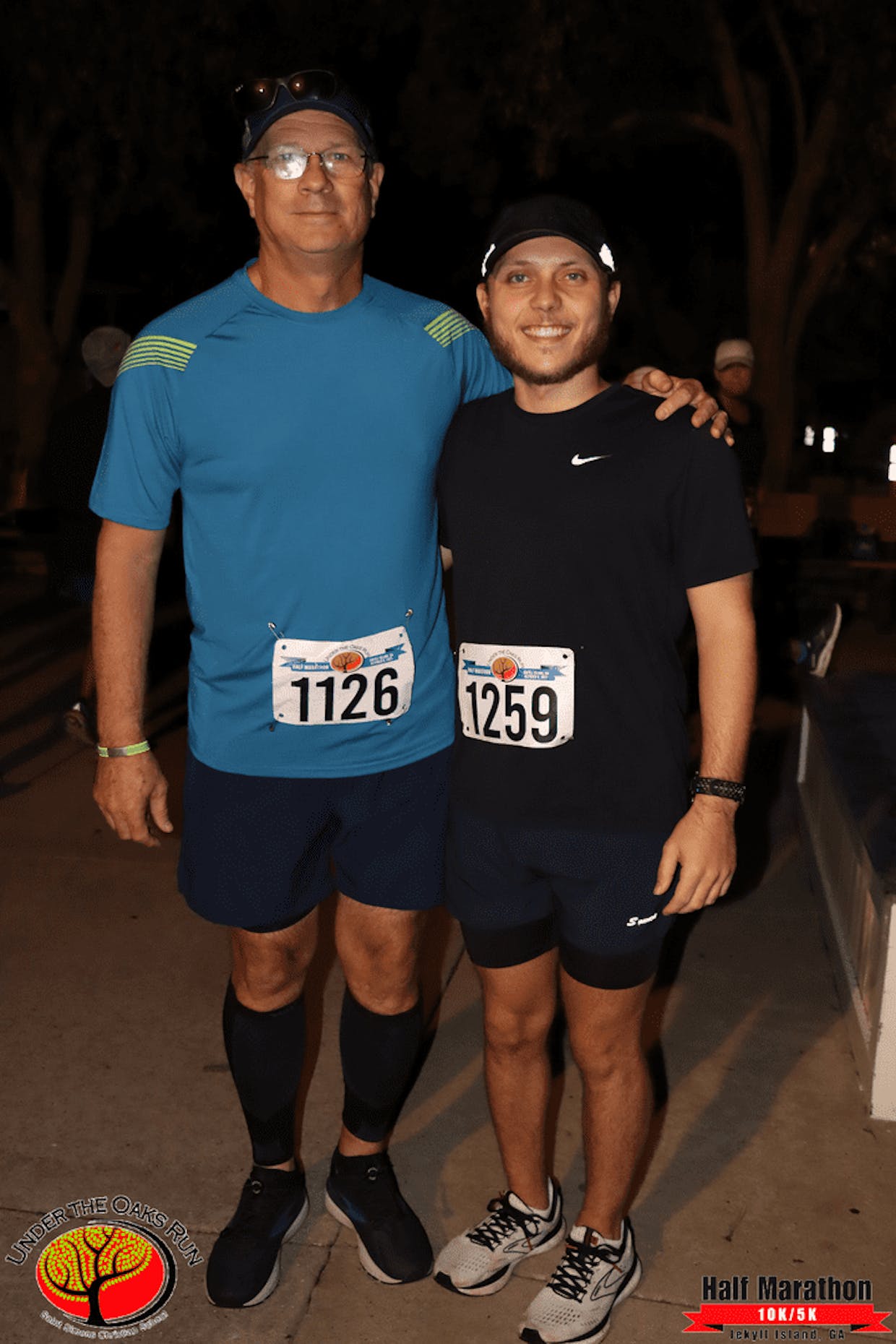 Liked by Heidi Edgar and 2 others